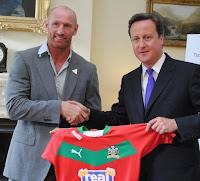 Last week, a documentary aired on BBC3, tackling the issue of homophobia in football. Presented by Amal Fashanu, niece of Justin, the only footballer in the UK ever to come out, "Britain's Gay Footballers" was also a challenging personal journey for her, who, in the programme, came to terms with the tragic events leading up to Justin's death, and tearfully confronted her father, former top-flight footballer John Fashanu, who publicly disowned his brother at the time of his coming out.

I was very impressed with the documentary. Even though obvious signs of discomfort and awkwardness were present in some of the interviewees, not least John McGovern, who declared that "(the word 'poof' is) another word for what we’re talking about, being a homosexual... I don’t even call that discrimination", and John Fashanu, who implied that "family honour" was more important than his brother's wellbeing, there were some positives to be taken from the programme.

First of all, the interview with the players of Millwall FC. The East London club isn't exactly everyone's second team (their own motto is "No-one likes us, we don't care"), but by being the first to invite Amal to their training ground, and having players Darren Purse and Steve Mildenhall publicly discuss the subject of homosexuality in football, they acknowledged and recognised the issue, rather than awkwardly sidestepping it or denying there's even a problem, as is usually the norm in football.

Surprisingly, a Premier League footballer also agreed to be interiewed by Amal. Previously, the lack of support from a top-flight player resulted in the Kick Homophobia Out Of Football campaign being scrapped, but Joey Barton, one of English football's most outspoken and colourful personalities, opened up to her about the subject, and in doing this, came across as a very mature, respectful and tolerant man, alongside being incredibly brave; until that point, not one top-flight player has said a word on the topic, most likely for fear of being ridiculed and called gay just for showing support - and unfortunately, some Twitter messages and photos hashtagged #britainsgayfootballers during and after the programme were pathetic examples of immature homophobic abuse aimed towards Barton and other footballers, the likes of which you'd maybe expect in secondary school.

Speaking of Twitter, the documentary proved a pretty apt litmus test of public perception. Although there were some making immature jibes about the programme and about several footballers who are probably not gay, the vast majority of people had nothing but positive things to say, praising Amal and the interviewees, especially Millwall FC and Joey Barton, so far unique in their recognition and support of homosexuality in football, posting tributes to the late Justin, and slating John Fashanu and John McGovern for their insincere contributions. Many big media personalities also chipped in with praises.

The documentary would lead to several interesting developments. The Sports Charter was launched by the Home Office in March 2011, with the intention of eradicating homophobia and transphobia from sport. Prior to the BBC3 broadcast, it had been slowly but steadily gaining signatures, with tennis star Billie Jean King and rugby veterans Ben Cohen and Gareth Thomas signing the charter in June, and Wycombe Wanderers FC signing it in October. The documentary then aired on Monday 30th January 2012. By Thursday, the entire Premier League had signed up to the Charter. In a previous article, I stated that one of the first steps in kicking homophobia out of football was for the likes of the FA and the Premier League (the establishment, basically) to publicly condemn homophobia and ensure it becomes as taboo as racism, punishable by long bans, huge fines and prosecution.
Amal's documentary has opened the public's eyes - by having the likes of Gareth Thomas and other rugby players discuss how tolerant rugby is of homosexuality, and Anton Hysen talking about how his sexuality doesn't concern anyone, team-mate, fan or rival, in Sweden, it highlighted the backwardness and idiocy of the attitude in English football (Joey Barton put it best: "archaic"), and that the Premier League's lack of focus on homophobia is the exception, rather than the norm, in the sports world. By signing up to the Charter, the Premier League has recognised the problem and has formally committed to stamp it out. This is that first step.

In her Guardian column, Amal welcomes the Sports Charter as "long overdue" - I myself struggle to believe it only came into being less than a year ago - but also shows her skepticism in asking whether it's "just a public front amid growing concerns about (the football authorities') lack of effort to tackle homophobia and transphobia in sport" and "whether or not it will reassure any players wanting to reveal their true identity and having a safe environment in which to do so".

Maybe not just yet, but with these groundbreaking first steps now taken, maybe the FA will reignite the Kick Homophobia Out Of Football campaign (after all, Millwall's players and Joey Barton have publicly stated their support against homophobia, not to mention the Charter's Premier League signatures), and, by convincing everyone involved in the sport that the environment is indeed becoming safer and more tolerant, players may indeed feel comfortable to come out. And when this happens, we will be very thankful to Amal, who laid the groundwork for it to happen, and who helped ensure her uncle's tragic death was not in vain.
Posted by Joe Jones at 14:16