European Football - the best it's ever been? 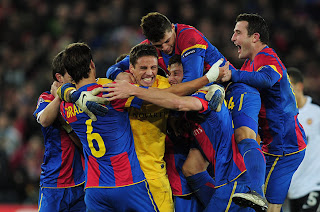 A recent article by Jim White, columnist for Yahoo Eurosport and the Telegraph, described how the new Champions League format - where champions of the lesser-known leagues are pitted against each other in a play-off round (previously known officially as the third round), while non-champions from the bigger leagues have to play each other in order to progress - as a farce. He slammed the group stages as "institutionally fixed", and “not a competition (but) an exercise in ensuring the big names progress smoothly”. Pretty strong words from the veteran journalist.

However, when the Champions League didn’t have this system, then journalists claimed it was a closed cartel. Always the same names in the competition. Very rarely did champions from smaller footballing countries make it through - teams such as BATE Borisov from Belarus, MSK Zilina from Slovakia or FK Partizan would often be relegated to the UEFA Cup and nothing more, while third and fourth-placed teams from Italy, Spain and England would breeze through the third round. Eshaan Koshal argued this in a Goal.com editorial two years ago. He, like many, harked back to the old European Cup, a knockout cup contested between actual league champions and direct runners-up, and called for a (somewhat wishful) return to that format.

Going back to the early 2000s, when the Champions’ League had two group rounds and the G14, an actual cartel of football clubs, attempted to lobby UEFA to maintain their status quo, lest it be “forced” to form a breakaway European Super League, those calls were incredibly more vociferous, but despite the scrapping of the second round stage and the eventual dismantling of the G14, there were still voices of dissent. The group stage still contained too many non-champions. In addition to that, the UEFA Cup was seen as a second-rate competition, with too many small teams.

Now, with the play-off system sending big teams into the Europa League group stage, while actual champions play in the Champions League, the competitions are as balanced as they’ve ever been, but now the argument is, the top league champions now have it too easy against the smaller league champions! They’re virtually guaranteed to go into round 2! So should they be going back to how it was before the play-off round, in order to make the provide more competition for those teams (and shunt the smaller champions into the Europa League) or will Jim White not rest until it reverts back to a seedless knockout competition between the winners and runners-up? I can guarantee that even if this was to happen (which it won’t because no team in their right mind would give up six guaranteed European ties, three at home, with the possibility of more in the knockout stages of either European competition), people would still complain, along the lines of “that team wasn’t given enough of a chance to prove itself in only two games”, “the winner had an incredibly easy ride to the final”, and of course, one which crops up in international football, “some teams are getting destroyed - what’s the point of them even playing in it?” - what Jim White is arguing currently.

The direct knockout format didn't stop the 1991 final, won by Red Star, being decided on penalties after 120 minutes of 0-0.

Let’s face it, you can never please everyone in football. Everyone will have their opinion. However, one should take into account things such as principle (having champions play champions, no matter how big or rich the league), development of the smaller teams (ensuring that qualification will be both an unforgettable and constructive experience for the Cypriot or Slovenian team, upon which it can build in the following years, both in league and subsequent European adventures) and romance (Russian Rubin Kazan beating Barcelona, or APOEL Nicosia playing out a 2-2 draw against Chelsea). Sure, the smaller teams probably won’t progress at first, but at least they’re getting a chance, something they didn’t previously get. The group stage is an adventure for them rather than a short lived blur of disappointment. It will guarantee them money upon which they can build, and they always have the opportunity to record memorable results. Seeding in the group means there won’t be any scenarios where the big teams will wipe each other out too early, leaving lopsided ties in the latter rounds. If you think that may actually work, just remember Manchester United versus Millwall in the 2004 FA Cup final.

Furthermore, the Europa League is now a worthwhile competition to watch, thanks to the injection of stronger teams in the group stages (incidentally this was also a fairly new format - up until 2005 it was a knockout, and a combination of this and mediocre teams really made for a forgettable competition), which in turn had perked up the interest of the bigger clubs in the competition - with teams like Atletico Madrid, Villarreal, Bayer Leverkusen, Juventus, PSV, Porto and Liverpool jostling for the trophy, it really is like a simultaneous Champions League.

So for once, instead of moaning (and there seriously is plenty to moan about in football), shouldn’t we be praising Michel Platini’s efforts to improve European competition? Based on the above criteria, could we say this format is the best it's ever been?
Posted by Joe Jones at 06:48