This year, on the 15th of February, at 1am, in a London apartment, one man made a decision to post a honest, heartfelt confession on his personal blog.

This man, a young yet accomplished professional footballer once on the books at Leeds United, had been well aware of what this confession might have done to his career, bearing in mind the track record he was up against. A career which he had painstakingly developed since he was a child and had taken him to the proud heights of representing his country, the United States, at international level.

Despite all this, he was suffering. "Secrets", he wrote, "can cause so much internal damage", and his secret was causing him so much anguish that he made the incredibly brave decision to sacrifice all he has worked for, to forsake his career, in order to release this secret and render him, in his words, a "free man".

On the 15th of February, at 1am, in a London apartment, Robert Hampton Rogers, aka Robbie, came out as gay.

Robbie must have been aware of the only other professional footballer in Britain to come out. Justin Fashanu, once of Notts County, Nottingham Forest and Norwich City, publicly declared he was gay on the 22nd of October 1990. Since then, his career was never the same. He received abuse not only from the fans, but also from established football figures. His own brother disowned him, and as far on as 2012, he sensationally declared Justin was not gay at all. The troubled younger Fashanu sibling was driven to despair and, ultimately, suicide.

Was all this what was to await Robbie once he too came out? It was too big a risk to take, and as such, he announced his retirement from professional football at the same time as his confession. He finished the post with, "I am a free man, I can move on and live my life as my creator intended." Clearly he didn't feel that he still had a role to play in football.

The footballing community, however, had other ideas.

Within hours of the announcement, there was an outpouring of support for Rogers. Many US stars, such as Carlos Bocanegra, Stuart Holden, Oguchi Onyewu, Brad Guzan and Kasey Keller all tweeted messages of pride and respect at his coming out, as well as sadness about his retirement. In the UK, Robert Snodgrass, Clarke Carlisle, Ross McCormack, Alex Bruce and Gary Lineker, among many others, also publicly expressed their support.

Rogers himself was taken aback by the reaction, tweeting: "Thank you everyone for all of the support and love. Wasn't expecting this."

Since the initial reaction, he tried keeping a low profile, but this was difficult - the story marked a turning point in the football zeitgeist.

Since the dark days of yesteryear in which Justin Fashanu played, the attitude towards the LGBT community in sport has changed within the UK and US. Over the last few years, negativity and misinformation has slowly been making the way for tolerance, acceptance and, crucially, indifference - not seeing coming out as a big deal at all, which is the pinnacle of inclusion.

Prior to Rogers' coming out, support towards homosexuality in football came in many forms - the likes of Anders Lindegaard and Joey Barton have publicly talked about the subject and supported the prospect of a fellow footballer coming out. In January 2013, Matt Jarvis of West Ham conducted an interview and posed for pictures in Attitude magazine. 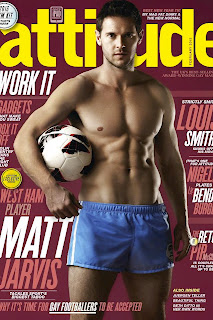 A survey by Staffordshire University showed changing attitudes in the stands too, outlining that more than 90% of football fans would not hold any hostility to a footballer coming out. Meanwhile, major clubs like Liverpool and Manchester City began initiatives in support of the LGBT community.

All of this, though, was mere preparation to the ultimate litmus test - what happens when a player actually comes out? The results, in the form of the public reaction to Rogers' coming out, turned out to be heartwarmingly positive. So much so that, in an amazing turn of events, Rogers began training with LA Galaxy at the start of May, and on the 24th, he officially came out of retirement to become a Galaxy player.

The mere fact that a professional player has knowingly put his career on the line to announce his gay, believing it would be over, only to then receive so much support that, encouraged by the positive environment, he overturned his decision in the matter of months, shows just how far not just football, but society as a whole, has come.

Obviously, this isn't the end of it. The culture of football in the UK still holds entrenched homophobic attitudes. But Robbie Rogers' story is testament to the fact that progress has been made, and continues to do so.

Crucially, part of the reason for Rogers' return to football is to become a role model for those who were still living in fear of revealing their sexuality, not just in sport, but as a whole. Initially telling the Guardian in March he "wouldn't want to deal with the circus", he spoke to USA Today Sports in May after his U-turn: "These kids are standing up for themselves and changing the world, and I'm 25, I have a platform and a voice to be a role model. How much of a coward was I to not step up to the plate?"

Even though he achieved so much merely by publicly coming out, his return to football is truly groundbreaking and a reason for celebration, a "Jackie Robinson moment" as Shawn Francis of The Offside Rules tweeted. Rogers now has the chance not only to continue his amazing journey as a professional sportsman, but to be an inspiration to millions of male football/soccer fans and players living in fear and confusion over their sexuality who now have a role model to look up to.
Posted by Joe Jones at 07:57